To the Waters and the Wilderness

I’m thinking about water, for this blog. I mean we lie around beaches and lollop in the waters for our de-stress from the distress of the rapidity of our lives and this to me is like a return to the waters of our mothers. We need the comfort of the repetitious tides and waves. It is a return to the womb.

But the beaches were very crowded in Goa over the ‘high’ season. I had to flee the bodies roasting in the sun, the
cocktail bars, the English breakfasts. It was too much: Palolem looked almost like Butlins, and  our boat trip to Honeymoon Island on Christmas Day only gave a brief respite from the mayhem. The dolphins kept their distance, the boatman were rushed and the whole adventure was more costly than a boat trip on Dingle Bay. So we returned to Gokarna, where I had intentionally left a suitcase at our Guesthouse with Anu and Anand at Hariypriya Guesthouse, knowing that High Season Goa would be something we would need to recover from. 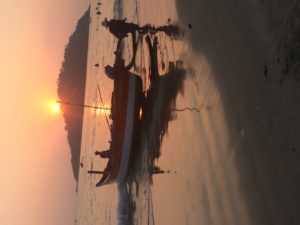 I took the path of compulsion again, skirting the inner sanctum of the Mahabalewsar Temple, where the most important Shiva Lingam resides (an abstract, phallic representation of Shiva) and yes, I was rebuffed again by its burly, territorial priests.  Something stirred in me as I walked  by the bright-yellow walls of the temple among hoards of swamis, priests and pilgrims. 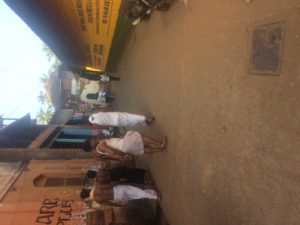 We had arrived at Gokarna  to a flood of bad news. Apart from the successful arrival by courier of my mala beads which I had forgotten at Shirdi  on the morning we left for Mumbai… well, the rest was bad news. Funding cut from Ireland and the likelihood that the One and I would ever meet again, drifted over the sea like a stray, forlorn balloon. I was at the threshold of something very new. An India without the One. A return to Ireland without the funding. A bleak horizon, but it had to have a silver lining.

Sudden news impacts: my lassi in the Mahalaxmi Hotel, with our Liverpudlian socialist friend, seemed unending and impossible to consume. My son’s Veg Thali looked like the most unappetising dish I had ever come across in all my time in India. It made me think of water buffalo stomping through muddy rice fields. Something was welling up from deep inside me: a horrible foreboding, despite being in the aftermath of the news. I was South, the One was North and ne’er the ‘twain should meet, even with the Rajdhani Express, or a cheap flight to Delhi. So it was. The waves of the sea started to rhythmically rise within me, and I could feel myself falling into a deep and inescapable pool of nausea. I managed to get out, leaving my son with the Liverpudlian, while I staggered across the street and threw everything up under a lamppost, to the vague curiousity of the MahaLaxmi’s western clientele, wincing over their milkshakes. A  similar disinterest came  from the Indian pilgrims. But I thought: what an honour to be vomiting within one hundred metres of the largest and most important Lingam in all of India, under Shiva’s gaze. It had to be some kind of purification. The moon was high, the pilgrims were still down at Gokarna bay, and the silhouette of the poor camel that took children on his back day in, day out, for a hundred rupees, could still be seen. 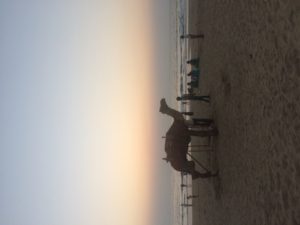 I fled down to the sea and cried. No, I didn’t cry, I sobbed. Sometimes this happens in India. When things go down, they really go down. India is like a Mother to me. When I am bereft in India, I am truly bereft.  Barefoot, I stared into the silvery waves purring over the beach. It was she, the sea, that comforted me. I came back to the Mahalaksmi empty and cold but clear. I was starting again, although it would be a long night of vomiting, which my son then began to do, and the next day was a day of lying very still on the hard mattresses, listening to the breeze move through the coconut trees, finding ways to move so slowly that the cramps in our stomachs would not knife us. Anu and Anand were as kind as ever and at the end of the day, we steered clear of  the MahaLakshmi, and ate a banana or two before deciding that Maggi Noodles were the best feast imaginable and quietly we cooked them on Anu’s stove, in front of her altar full of golden gods. 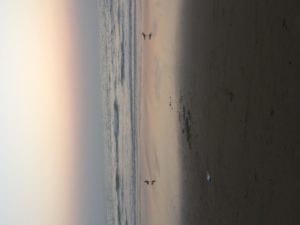 The Sea. There is such comfort in it. On Christmas Day, when we had been down to the Boats at Palolem in Goa, and taken one over to Honeymoon island, to see the Dolphins, who kept a safe distance from our boat, God’s Grace, and did not follow us, but danced their way across the horizon. 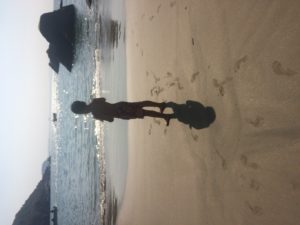 At Honeymoon Bay, chance had us meet a Tibetan family who had wandered over from the Mundgod, the protected Tibetan refugee Camp about 100 KMs from Gokarna. Our boatman had left us on the island, stranded until 3pm. So when a group of drunken Indian men offered us a lift back at lunchtime, we jumped in the boat, luckily steered by a sober Goan. The boys sang all the way to Palolem and we went back to our hotel, to salads and sausages- not a turkey in sight, and not even a decent Indian dish.

I wonder about the secrets the sea keeps: Atlantis, that lost city that Plato wrote  about. What else does she keep in her vast belly? The stories of lovers’ tears? Despair, escape, anonymity, lawlessness and piracy? She is soft and undulating, but she is also wrathful and wild and violent. Lucky, we were, to be on this side of her, walking on the soft sand, listening to the waves.

Rivers  have secrets too. Back in Palolem, after we left Gokarna with the suitcase, we found the place finally quiet after Christmas. We stayed at the sleepy Dreamcatcher hotel, covered in a canopy of coconut and mango trees. 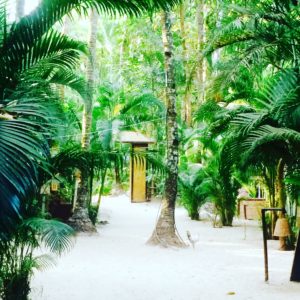 During the day we took the riverboat with Babu, on a balmy afternoon. Between his renditions  of Mohammed Rafi songs, he told us about the Jalpari, the mermaid, which he had seen at the far end of the bay, beyond Palolem. Sitting on a rock. Just like that, he told us, in the same tone as he told us about the Kingfisher who was in the river bushes, and the Cobra whose shedded  skin was hanging from the tree over the river, like a cast off sock. He flung chicken guts int othe river and the Eagles circled and swooped rapidly to their booty… 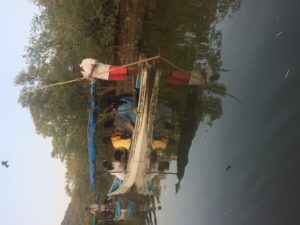 I wondered about the mermaid Babu had seen. He only knew what I was talking about because I knew the Hindi word for mermaid, Jalpari… something the One had taught me. Otherwise Babu would never have known what I was asking him. As we slid down that silent river, the Cobra watched us from his tree, the Herons stared from the riverbank, the Kingfishers darted past, and Babu sang his songs while an indolent fisherman waded through the waters catching glistening  silver fish in his net, while I wondered if I would ever see the One again. The waters would carry on and on, and so I would follow the course of the river with Babu, hoping my memories could be left in the water, and that I could, like the Cobra leave this old skin in the tree that hangs over the river.

It’s always our self we find in the sea.” 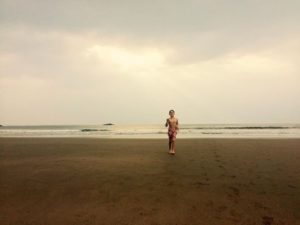