Anyway here I am back in India, for the first time with my son since he was 8 months old visiting the Dalai Lama, and living on a farm near Dharmsala with dear old friends among the paddy fields. This time, I have come to forget about someone I met here who impacted my life so much that… well it was hard to cross the portal at Mumbai airport Departures, where we last saw each other. Let’s say, very hard. And where do I come to forget about him? To the very place I last saw him. The awkward logic of the heart.

But, first stop was Shirdi, before I trailed the old familiar paths of love disintegrated. Although I had never been to Shirdi, it was immediately familiar, a feeling I have only encountered with such speed in Krakow, Poland which was once my second home. Shirdi is where this humble Baba saint, Sai Ram, lived over one hundred years ago. I am convinced I was here before with Baba of Shirdi, and the One I am trying to forget… yes, I am saying that I was there a hundred years ago. Believe it. Or not. I’ve never said anything like this before… in public…but- there it is. I’ve said it.

Now if you think football match crowds are frantic and even a little dangerous, try Indian temples for crowd frenzy. Devotees in the temple are drunk on worship: you see a sea of sari colours, little possum eyed babies peeping over their mothers shoulders, men crying out the bhajan devotional songs, the pujari priests waving the yak tails at the deity, offering flowers, incense, milk and rice… a lot of cymbal bashing, bell ringing and clouds of smoke… 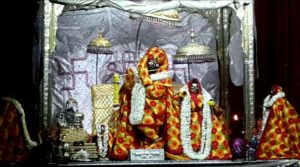 I remember the  Kali Ghat Temple in Kolkata, where crowds lunge at the image of Kali for a piece of her blessing, and bouncers literally shove them back…while goats are sacrificed in the courtyard outside. But Shirdi is different. A small town, five hours north of Mumbai where, a hundred years ago a humble saint attracted thousands to his feet, in a Masijd, a Muslim temple, which now continues to attract now more and more thousands than ever.

Nobody ever knew where Shirdi Baba was from, nor whether he was Hindu or Muslim. It hardly mattered, his message was so simple. He begged for his food with a bowl, and used to say: “Allah Malik Hai”, meaning ‘God is Supreme’. He denounced any convoluted teachings for simplicity, decency and boundless compassion for his devotees. He was known, at first, in Shirdi as the ‘Mad Fakir’ though over time as his extraordinary being gained renown, he allowed his Hindu devotees to put sandalwood paste on his forehead. Yet, it was of no consequence to him. 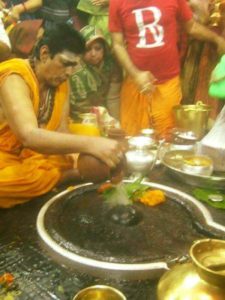 Having become aware of Shirdi Baba over the last couple of years, I felt an immense yearning to come to this place. When we got there, I walked down to the temple with my son, who had his first conscious encounter with the Indian bazaar when we bought a bag of marigolds for the temple, and he ran back to the hotel to stick his face in a Wimpy Kid Diary.

“Mum, why are we the only white ones?!” He said, agape at the bazaar, its wheezing auto rickshaws, its monstrous buses and trucks, its sleepy cows and dogs, the whole road a river of movement and chaos.

With the bribe of a strawberry milkshake, I enticed my son back down the bazaar, past the old men beggars in white khadi, and the women pawing at us for a few rupees, old sadhus holding their tin cans out, and down to the temple where the fire has stayed lit for one hundred years, the very fire that this living saint stoked for his cooking, and the ashes from which, called ‘Udi’ cured miraculously. Down the road, in the Masijd, he sat and listened to everyone’s problems. 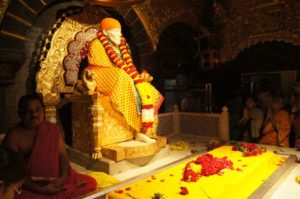 The Image of Shirdi Sai Baba in the Samadhi Temple

Shirdi Sai Baba said to his devotees that one day people would form lines like ants to visit his temple, and lights would flash all over the town. Nobody believed him, one hundred years ago in Shirdi, then a small village with 45 houses. Now, people queue for miles to get his Darshan (blessing) and the crowds are hot and eager for this ecumenical saint, at a time when tension between Muslims and Hindus is at another peak with IndianPrime Minister Modi’s demonetisation policy, an overnight ban on 500 and 1000 Rupee notes, a bid to stamp out corruption, tax evasion and the funding of terrorist organisations breeding from Pakistan, the bane of India, a painful and endless hangover from the British Raj’s legacy of Divide and Rule.

I don’t think I have ever felt so welcome, anywhere, as I have at Shirdi. We were only there for three days and three nights but we made friends there that I will have for life. I met them outside Anil’s garland and souvenir shop on the first evening at Shirdi, taking off from where I left off one hundred years ago. Sometimes you just know in your bones you’ve known someone before when you meet them first. 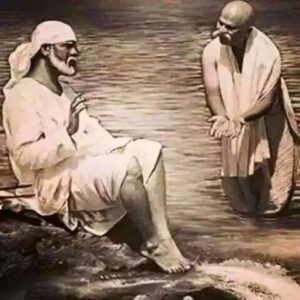 In the frantic elbow-Ing and bum jabbing in the Main Temple, in a queue that is not for the faint hearted, we finally got to glimpse the radiant golden chamber where He sits… and I quietly said to myself, “Dear One, please take my memories and transform them into gold…” and I left, with a red rose and a bag of blessed sweet puffed rice and my little boy in a lather from the crowds.
“Thank God,” he said, “that’s over.” 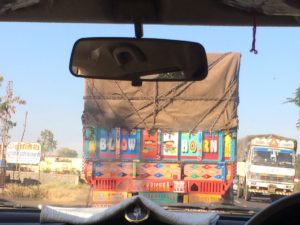 In the aftermath, we had that strawberry milkshake and a fluorescent pink candy floss as we watched a camel being led down the bazaar. As we left for Mumbai from Shirdi the next day, hundreds of devotees were carrying effigies of Shirdi Sai Baba in chariots along the road on a Palki walk from Mumbai to Shirdi. If it took us five hours in a car to get to Mumbai, God knows how long it would take them to walk those dusty roads with trucks spitting clouds of dust at them. But then again, this is India, where the Gods are loved passionately…

P.S. Thanks to  my dear Friends Archana and Prakash for the photos of the Temple and of Sri Sai Baba! 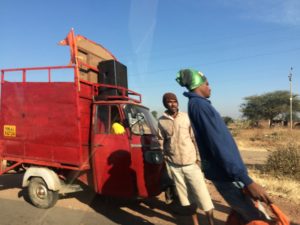