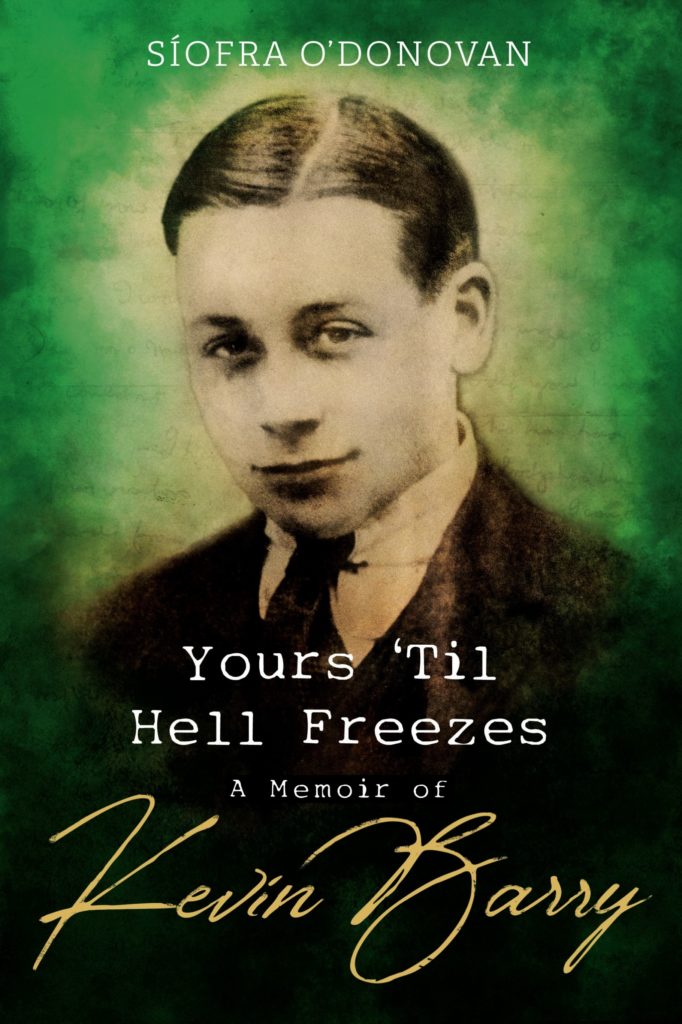 Yours Til Hell Freezes published by Currach Books, September 2020 https://currachbooks.com/product/yours-til-hell-freezes/

“A richly detailed and discursive search for the real Kevin Barry, a voyage of discovery through family roots and disagreements, digging deeply into family memory and archives, asking, if not always answering, hard questions. Honest and intense and always readable.” – Maurice Manning

“A work of feeling and truth, in which imaginative audacity is accompanied by the pressure of felt family experience. Síofra O’Donovan sees the personal in the political because she abhors the lie which often keeps them apart. – Declan Kiberd, University of Notre Dame

Yours ‘Til Hell Freezes is an intimate portrait of the young rebel martyr Kevin Barry, written by one of his closest descendants. Síofra’s life was enriched by Kevin Barry’s belongings – his shillelagh, his letters in brown ink, his Belvedere cap, his memorial cards, his copy books, secret British correspondence and letters to and from eminent figures about him. Kevin Barry was the first person to be hanged by the British after the 1916 Rising, at 18 years old during the War of Independence. Although Kevin was young, he had a full life. This book brings new life to Kevin Barry, using material from family papers and the public domain. The poignant descriptions of his final hours is gripping and chilling in detail. 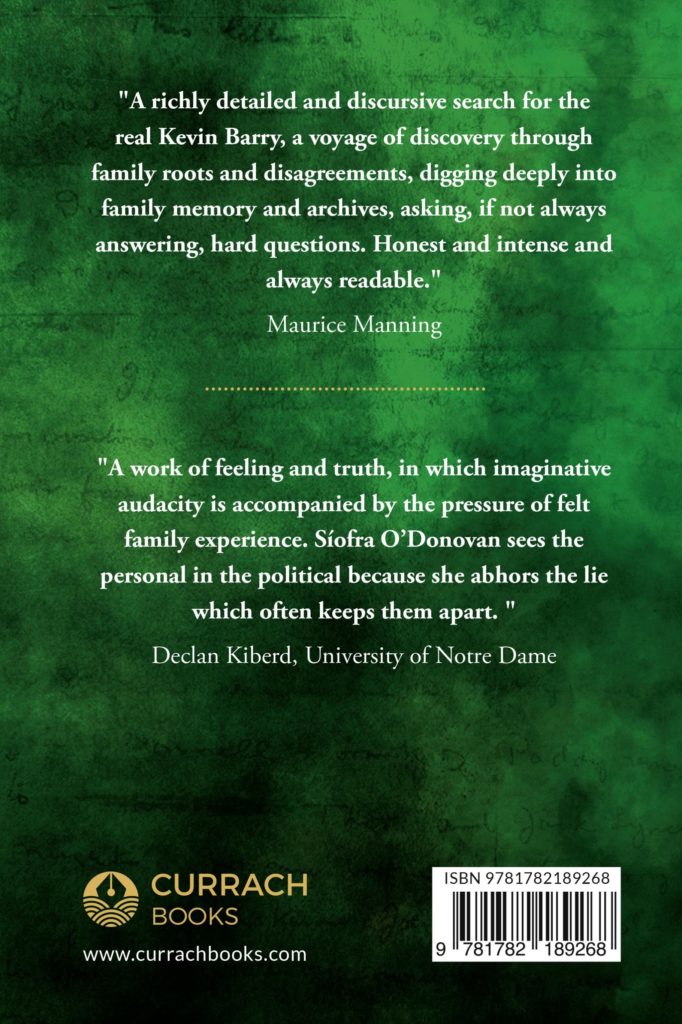 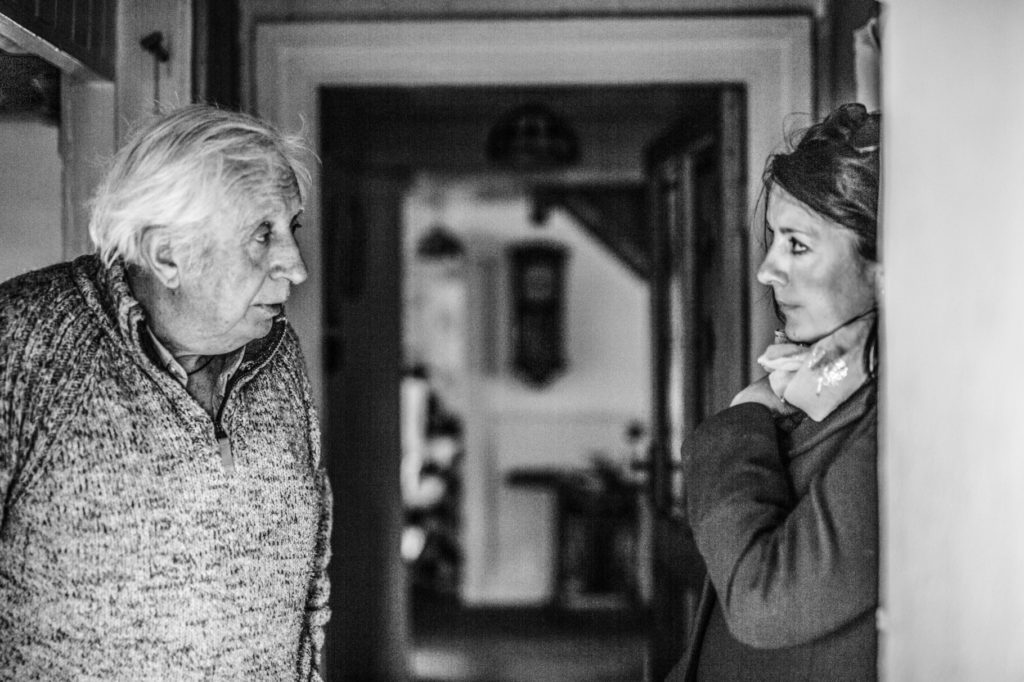 A letter from Kevin Barry…

Even with the curfew imposed in February 1920, Dublin still spilled over with life. ‘Meet at the Grafton Picture House’, read an advertisement on the street. Kevin frequently met friends there. In a letter to his friend Bapty Maher (who later married Kevin’s sister Shel Barry), at Christmas 1919, he wrote from the family home in Tombeagh, Co Carlow:

I wrote you a letter about a month ago and I don’t know if you ever got it as I’m not sure if I put the right address on it. Anyway how are you since I saw you last? You might write to a fellow you know, now and then, and say how things are. Now answer this soon and answer it to ‘my town house’ as I’m nearly fed up here … yours to a cinder, Kev.234

Three weeks later, he still had no answer from Bapty, by which time he was back up in Dublin at 8 Fleet Street.

How the devil are you at all? You know you might write to a fellow once in a while. I wouldn’t mind me not writing because I’m very busy, pictures, National Library (ahem) and Grafton (5–6pm), but a fellow like you – a bloody gentleman of leisure, you know it’s unforgivable.

By the way that bloody bastard never came with the suit with the re- sult that I have to borrow one for a dance tomorrow night. Write and tell him that I say he’s a ——so and so etc.
When will you be up in town? You ought to come for a ceilidhe (College of Science) on the 30th Jan … Yours till hell freezes, Kevin 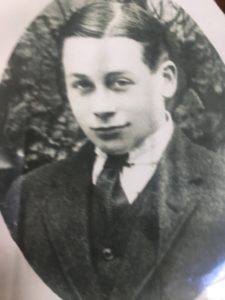 Extracts from ‘Yours Til Hell Freezes’…

When you are the descendant of a hero, you live in their shadow. I tried to run from the overwhelming charisma of this boy-hero-great-uncle Kevin Barry, whose story was sung by Paul Robeson, Leonard Cohen and every traditional Irish band you can think of. Yet my grandmother, Kevin Barry’s sister, would not allow the song to be sung in the house. It was maudlin, she said.

But Kevin wasn’t maudlin. An oval portrait of him hung in my father’s study – a copy of a painting by somebody in the H Company of the IRA. The face and shoulders of Kevin Barry had a slightly airbrushed look, set against a monochrome and patriotic green background. Kevin had a quiff of hair like Tintin and was wearing a trench coat with the collar upturned. He beamed eagerly around my father’s study, like a friendly family ghost. Beside this portrait was another one of my grandfather, Jim O’Donovan, in a rectangular frame, painted by Leo Whelan. A true die- hard, my grandfather’s convictions had him locked up long after the War of Independence. His face, in the portrait and in real life, was sterner and more chiseled. When I was brought to see him in his nursing home, he never looked at me. I looked at him, in his wheelchair, at his hand with missing fingers – blown off when he was demonstrating a hand grenade he’d just invented. I found the stubs of his missing fingers fascinating. For some reason, we called him ‘Beep-beep’, although I have no idea why. I heard more recently that he occasionally demanded bottles of whiskey from my alcoholic father and other visitors. He needed an anesthetic for the past and for the tragedy of his wife Monty, who then lay prostrate on her bed down the corridor in the same nursing home, riddled into paralysis by several strokes. A woman of acerbic wit and sharp intelligence was living her final years in a terrible limbo.

My grandmother Monty was the first dead person I ever saw. I stole a glimpse of her in the open casket at her funeral in the nursing home chapel. I never forgot her still, waxy face and the smell of candles and incense hovering around her. My father quickly took me out to the cold corridor with my cousins and we were told to wait there until the funeral service was over. I heard the drone of praying, and the priest muttering gloomily from the altar. She, Kevin Barry’s second-youngest sister, was gone. My grandfather was gone too by 1979. They were all slipping away, leaving my father angry and intolerant of our inability to grasp who these people were. He wanted me to carry the chattels of our family history, but I did not want to do it. He would sit in his green armchair and tell me stories of how Kevin Barry cycled over the Wicklow hills to drink in the hotels in Glendalough and Aughrim, how my grandfather locked himself in a room at night in the family home in Shankill, County Dublin, speaking German to his secret friends in Nazi Germany. How my great aunt Kitby, Kevin Barry’s older sister, sailed to America with Countess Markiewicz, on De Valera’s orders, to fundraise for the Republic. But my father always came back to Kevin. Kevin spinning around on his bike in his Belvedere cap, drinking, dancing, pulling Belgian girls, out on the streets in am- bushes, down alleyways carrying arms. And in the end, hanging on the gallows, just like in the song. The stories seeped into me. I resisted, but there was nothing I could do, because they were part of me.

My father’s childhood memories were of dark-hatted men in a green Morris Ten with ‘Dark Rosaleen’ attached to its bonnet. His parents’ strange nocturnal visitors were, he came to suspect, to do with the IRA. When my father was twelve years old the German spy, Herman Goertz, was put up in my father’s room in the family home. Goertz moved on to the garage or the orchard by day, hiding behind the eucalyptus tree. My father, in this visiting spy, found another father – one who had heroically parachuted out of the sky, who hid his codes under the eaves of the stable and was fed dinners by my grandmother Monty. As far as my father was concerned, he was a hero, dropped from a Heinkel 111 bomber near Ballivor, County Meath, where an amused farmer asked, ‘Do you not know Ballivor?’, when the spy inquired as to where on earth he was. When Goertz was leaving my father’s orchard to find another safe house, he gave my father his Third Reich knife and revolver. He kept them until they were stolen from our home during a burglary in the 1980s. My father had no understanding of Goertz’s political ideology nor that his father had invited the spy to Ireland to work with the IRA, although he had some suspicions. What he knew was that he had found a surrogate father in the orchard. Herman Goertz took his own life in 1947 when he was instructed to leave Ireland. My grandfather had kept his cyanide capsule safely all those years.Although I grew up with these gripping tales of espionage and family militarism, it was Kevin Barry who made the greatest impact on me. The rest of it was just too frightening and strange, such as the thought of my grandfather Jim drinking tea with Hitler (which he didn’t, of course), or speaking to him on his radio from the family home (which he didn’t do either). I took refuge in our family hero, the boy who beamed at me from the oval portrait in my father’s study. I wrote essays about Kevin Barry for history class, described the ambush on the Monk’s Bakery in detail, faithfully recording the account written in Sean Cronin’s 1965 pamphlet on Kevin Barry. I could see his face as he was driven with the British soldiers to Bridewell prison. Irate, but amused. I wrote about the arrest on 20 September 1920 and about the short time he spent in Mountjoy prison before his execution on 1 November. He was hanged the day before my birthday and, although we lived decades apart, his death was a shadow that followed me everywhere. 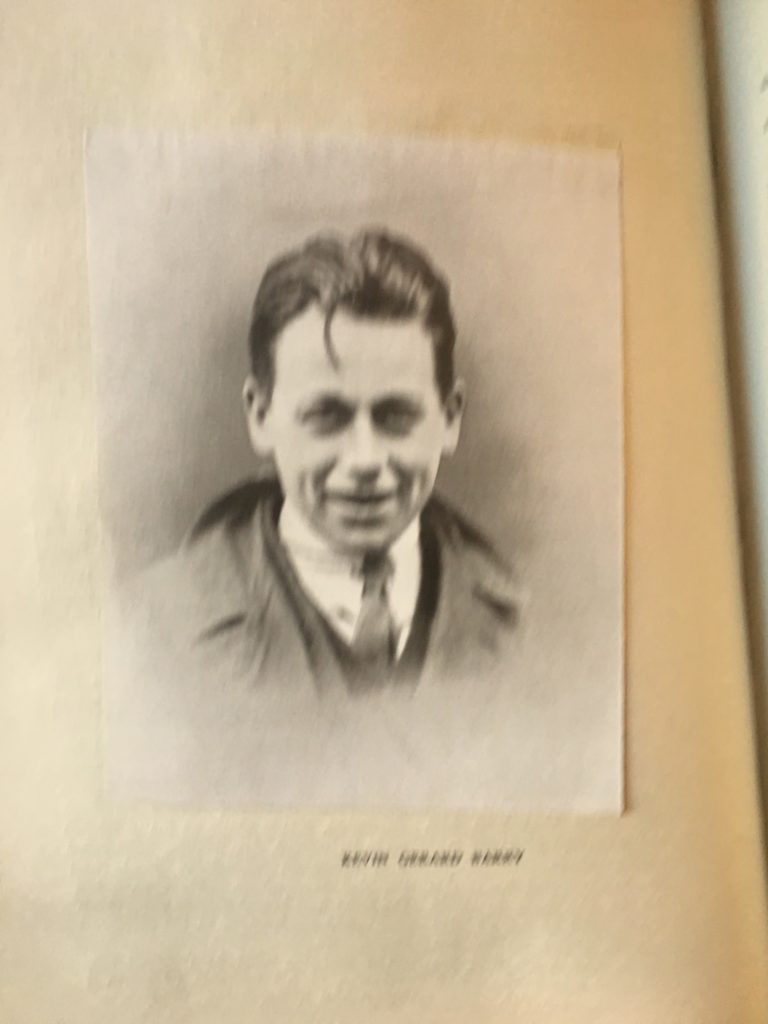 Kevin Barry in his infamous trench coat, photographed by the Keogh Brothers. In the Belvedarian, ca. 1919 Rather more worldly than his years.

On 19 September 1920, Captain Séamus  Kavanagh called Kevin Barry aside and asked him about his exam the following day, to which he responded, ‘Oh, that will be all right.’ Kavanagh told him he didn’t want him to miss another examination, knowing as he did that he had already missed one on the day of the King’s Inns raid. Kevin asked, ‘How do you think I could sit for an examination, knowing this job is on and me not on it? Why, there might be another machine gun for “H” Company, and I’d hate to miss it.’362 Kavanagh saw the look of bitter disappointment on Kevin’s face when he told him he could not take part, so, he conceded and even made sure to tell Dr McKinney, who taught at UCD, to help Kevin in case he missed his exam. McKinney had helped Kevin when he missed his exam when he was on the King’s Inns raid. Since that raid on 1 June 1920, it seems that nothing was more important to Kevin than being a soldier. Kavanagh wrote in his statement: ‘I can never forget the look of delight on Kevin’s face when I told him he could come on the job.’

Not only was the plan important to Kevin, Kevin was important to the H Company. His capability as a soldier was indispensable, and Kevin knew it. He was willing to gamble his medical training. ‘On Monday, 20th September [1920], Kevin was to sit for an examination at 2 o’clock. He had come up from Tombeagh some days before and, on instructions, had not stayed at home [but] with [our] uncle, Patrick Dowling, 58 South Circular Road.’

On the evening of 19 September Kevin had his dinner with Kitby and his mother at 8 Fleet Street, and not at Pat Dowling’s. This would be his final meal with them. Kitby and Mrs Barry were going to see the Dixons in Sandycove after dinner. Kevin did not go, of course. He was in great spirits, singing ‘The South Down Militia’ with Kate Kinsella as they went out the door.

You may talk about your King’s Guards, Scots Guards an’a’,
Your Back and Tans and Kilties
An’ the fighting forty-two

Also our brave Auxiliaries
A most ferocious band
But the South Down Militia is the terror of the land.